Deep in the heart of Texas, the stars at night are big and bright. Unfortunately, Texas is also the place where rent prices are big and bright. How do we know this? No, not from a country song. RENTCafé created a top of the priciest ZIP codes for renters in Texas. According to the study, renters in Austin pay the most for an apartment, followed by those in Dallas and Houston.

Here’s how much rent costs in the top 10 most expensive ZIP codes in Texas: 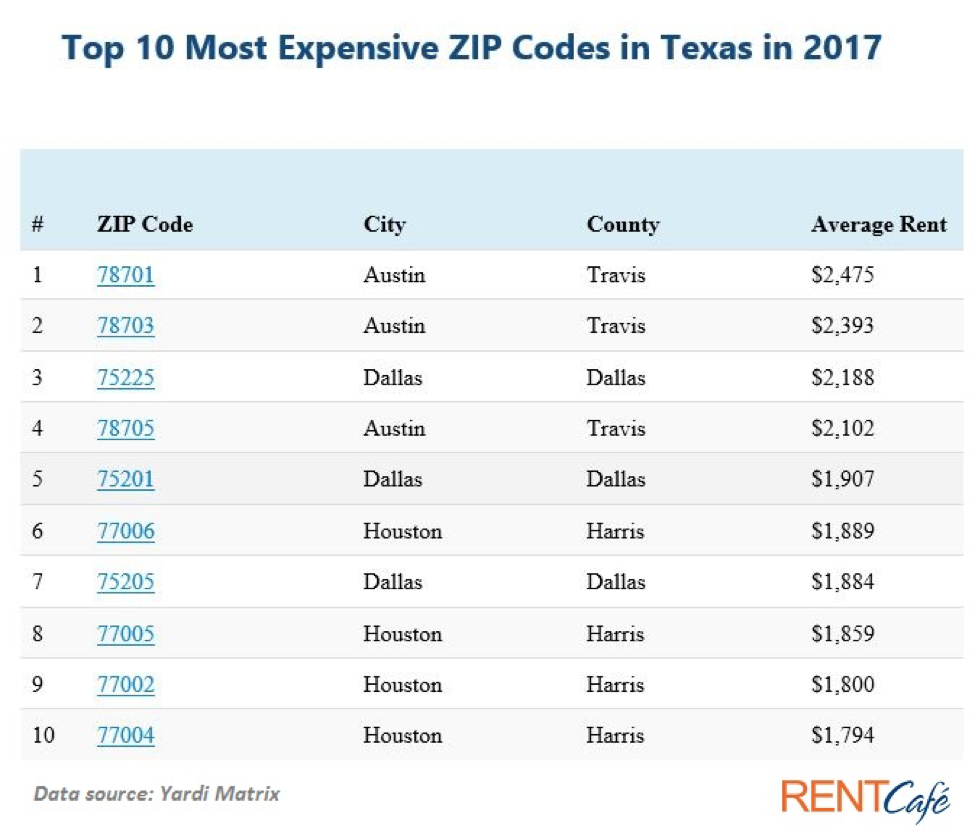 The average rent in each of the 50 priciest ZIP codes in the state is above the national average, which hovers right above $1,300/month, but rent growth is slowing down. Compared to last year, rent rose in less than half of the 50 ZIP codes that were analyzed. As a matter of fact, prices fell in 23 ZIPs with 2 of them seeing two-digit drops. In 6 ZIP codes prices remained unchanged.

Austin is the Most Expensive

The two most expensive Texas ZIP codes are in Austin. At the top of the list is 78701 (Downtown) with an average rent of $2,475, followed closely by 78703 (mostly Tarrytown and Clarksville) with a monthly rent of $2,393. While 78705 (approximately Central Austin) only took the 4th place in the RENTCafé top, with a monthly price of $2,102, these three adjoining ZIP codes make up the most coveted area of Austin.

Renting an apartment here means shelling out more than twice the state’s average rent of $1,063. The two most expensive ZIP codes actually saw prices dipping by 3% and 5% year-over-year, respectively, whereas the cheaper ZIP of the three (78705) saw a 5% increase year-over-year. In total, 10 out of the 50 most expensive ZIP codes are located in Austin.

Dallas Gets the Silver

Now, prices may not be sky-high in Space City, but it certainly grabbed the most spots on the list, more precisely 15 from the 50 priciest Texas ZIP codes are in Houston. It also produced the two most spectacular price decreases of the 50 ZIPs. Average rent prices in 77005 dropped by 10% and in 77046 by an even higher 11%, compared to where they were last year.